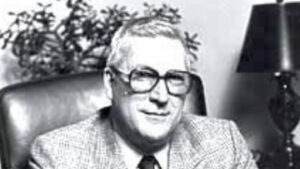 George and Jane Langenbach had been involved in various businesses over the years from Patty Cakes to a Volkswagen dealership in the Midwest, Langenbach Volkswagen of Collinsville, IL. Though George and Jane did well in their various business ventures, George had always had an inventor’s spirit. After growing up in the automobile industry, George developed into a “can do” man that could fix anything, and before revolutionizing the foundation repair industry, he had several poorly timed attempts at inventions such as an air door, push button phone, a see-through grinding wheel and an automatic pill dispenser.

The Perma Jack System was invented in 1974 by George Langenbach. George, with encouragement and orders from his wife Jane, developed the first remedial hydraulically driven steel pier foundation repair system. He had observed several failed attempts to resolve a foundation problem at a neighbor’s house in a neighborhood of St. Louis, MO. The home he observed was owned by an elderly widow and had concrete piers installed twice previously. The concrete pier process was not only expensive but also required extensive excavation, large crews, dump trucks and concrete trucks to install. He told how his neighbor had told the contractors to stop at $10,000, which was quite a sum in the early 1970’s.

The Solution to Damaged Foundations

George, also known as Mr. Clean, knew there had to be an affordable solution that was simple, fast, and low impact. The Perma Jack System was born, one of the inspirations George liked to use when describing his invention was that it worked like a bumper jack, for those of us that can remember steel bumpers on cars. George decided, due to the great reception of the method, that franchising the Perma Jack System would be the next logical step. His son John started the first Perma Jack franchise in St. Louis with his sister Joan answering phones and scheduling estimates, which grew in leaps and bounds. George focused on expanding the Perma Jack Network that supports the longest running nationwide network of hydraulically driven steel pier foundation repair system franchises.

George’s decision to franchise quickly proved to be a good one.
The Perma Jack network of franchisees expanded rapidly proving not only that the foundation repair system was a huge mechanical success, but that a tremendous need for a neater, cleaner method of foundation repair was long overdue. George and Jane were very family oriented and always put family first, and set up Perma Jack Company to continue as a family business by passing the reigns to Joan Robinson and John Langenbach in 1986.

George and Jane did not waste a way in retirement but traveled the world, toured the country in a motor-home, visiting family and friends and spending as much time with family as possible. Of course, the inventor in George never faded after developing Perma Jack into a national network of foundation repair franchises, he continued to work on more inventions which included pinch-less tweezers, several door locks, a portable dialysis machine, and a transcutaneous access port for use in dialysis treatment. The family business is now owned and operated by John Langenbach along with his daughter Jessica Langenbach.

We Look Forward To Working With You!